When I set out to make a fake diploma review site, on of the first sites that I knew I needed to purchase a fake diploma from was PhonyDiplomas.com. Their company claims to offer "replica" diplomas, and this was my chance to order a real product from them and really grade them, openly and honestly.  At the end, my experience was rather good with Phony Diplomas but I did have a few complaints. 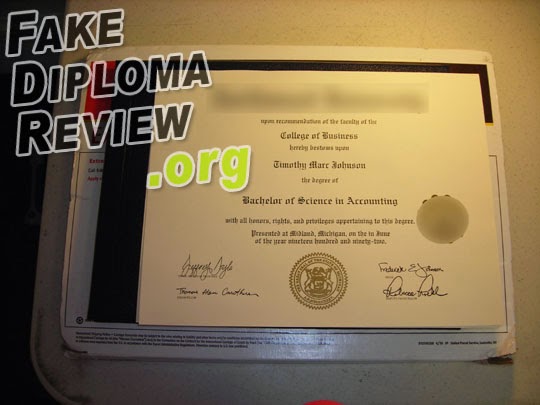 When I ordered a diploma on their website, it was for a school that I had graduated from and had a real diploma from. This way I could compare their "replica" work side-by-side to the real thing. I knew that there would be some differences including signatures because of forgery regulations and seals because of copyright, but overall I was really looking to see if they matched the diploma's layout, which would tell me that they had a clue what the real one looked like.

What was the number one complaint with the diploma from Phony Diploma?

Now, my actual diploma has some pretty distinct characteristics, including a seal in the bottom middle. As you can see in the photo of the diploma they sent above, they got that part right. What the real diploma doesn't have is a seal to the right. Some people might think the extra seal looks cool, but if I showed this to another graduate of my school, they would know that it was a fake right away. That is a major complaint of mine. 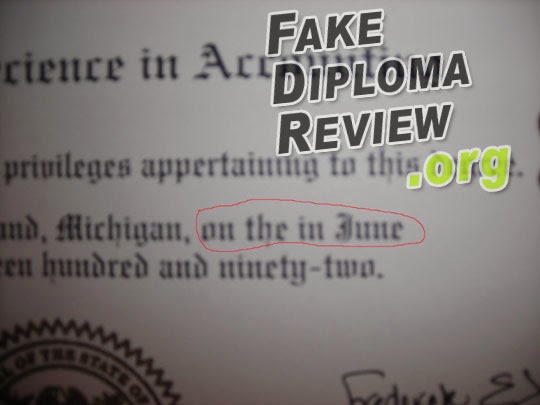 Another big issue on my fake diploma from Phony was misspellings. As you can see on the closeup photo above, the diploma they sent us says "on the in June". What does that even mean? haha Now, more than that... the real diploma actually says, "Given in Midland, Michigan, the twenty seventh day of June". As you can see, not only did they write it wrong by saying "Grantland, Michigan, in June" but they obviously miswrote the whole part about "on the" which simply doesn't sound right.

This isn't to say that every fake diploma you order from Phony Diplomas will come out with misspellings. I get plenty of feedback from PhonyDiploma.com customers who have positive things to say about their experience with them and very little complaints. Still, what this leads me to believe is that they did not have a replica of my diploma on my file and sort of rushed to put together my order.

You can obviously read more about my experience with PhonyDiploma.com on my review page. There, I have proof of payment being made, getting the package, and photos documenting their entire experience. At the end of the day, Phony Diploma did send me my order so be careful of any other review sites which state that Phony will take your money and not send you anything. That is simply not true. Phony also since apologized for the mistake and has made ever effort to fix them.
Posted by Unknown

This blog offers online reviews of popular fake diploma sites! If you're looking to buy diplomas or transcripts online, you owe it yourself to check out some of my reviews where I've purchased products from such shops and documented every step of it with photos! See what your money buys you!